Unlike plant pathogens, S. enterica and E. coli grow poorly in the phyllosphere (on plant leaves), because unlike plant pathogens, they cannot liberate nutrients from plant cells. Nonetheless, many food-borne illness outbreaks have been caused by eating raw leaves and fruits. We found that if a plant pathogen (such as the tomato bacterial spot pathogen Xanthomonas perforans, Xanthomonas euvesicatoria, or Xanthomonas gardneri) is present on leaves, S. enterica grows to human infectious doses even under conditions where it cannot do so alone. This work suggests that plant disease in the field may be a risk factor for food-borne illness from consumption of raw produce. Future research will investigate how plant infection benefits Salmonella.

Soft rots of many fruits and vegetables, caused by Pectobacterium carotovorum, was singled out as a factor influencing human enteric pathogen contamination of raw produce. We discovered that under modified atmosphere packaging (such as bagged salads), the presence of S. enterica reduced Pectobacterium carotovorum populations and virulence by moderating local environmental pH elevation by Pectobacterium carotovorum. In contrast, E. coli O157:H7 failed to alter the leaf environment or suppress plant disease as S. enterica did. Whereas soft-rotted produce can alert consumers to the possibility of human pathogens, healthy-looking produce may entice consumption of contaminated vegetables. S. enterica inhibition of soft rot disease progress may conceal a rapidly growing human pathogen population. We plan to examine metabolic and nutritional differences between closely related plant-associated enteric human pathogens (S. enterica, E. coli) and plant pathogen (Pectobacterium carotovorum) to understand how enterics with different life styles avoid competition and what metabolic strategies lead to the success of symbiotic bacteria that inhabit multiple, discrete plant niches. 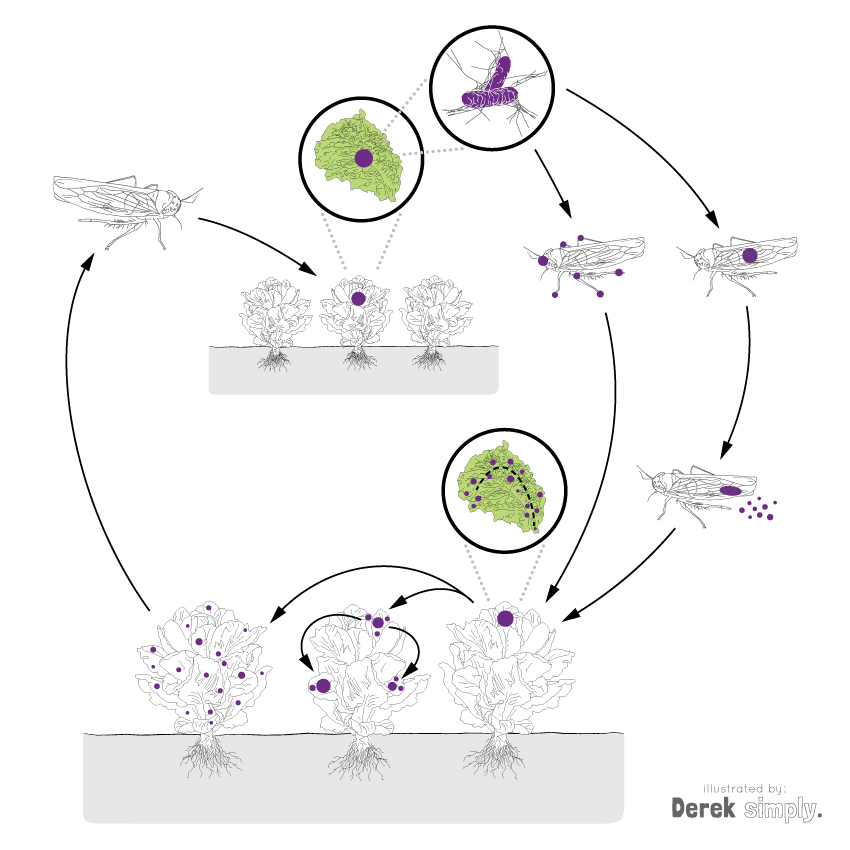 We have found that phytophagous (plant eating) insects can become contaminated upon contact with S. enterica surface-contaminated plants. S. enterica can adhere to various structures of the exoskeleton and mouthparts of the insects, but can also be internalized. Internalized bacterial can be excreted in droplets of honeydew that are released onto leaves. S. enterica distribution on the leaf surface is altered by insect feeding, excretion and movement (dashed line) behavior. Both mechanical contaminated insects and insects with internalized S. enterica can increase the risk of dispersal of the pathogen within or among plants.

This project was highlighted in the Fall 2014 Issue of Grow.

Dissecting Salmonella enterica and E. coli plant colonization, one step at a time.

My research group investigates the biology of S. enterica and Shiga-toxin producing E. coli (STEC) in association with plants. Although enteric human pathogens are usually studied in the context of their animal hosts, a significant portion of their life cycle occurs on plants. We focus on S. enterica because it is most likely to be transmitted to humans on contaminated raw produce (not poultry, as many assume), and because the agricultural crops that transmit salmonellosis are more diverse than those that transmit STEC. We focus on the discovery of mechanisms that facilitate plant colonization, including attachment, growth, and persistence and interactions with other plant-associated organisms. To gain evolutionary insight, we compare and contrast our findings with other plant-associated enterics. S. enterica and STECs are both enteric plant symbionts, while Pectobacterium carotovorum subsp. carotovorum and Dickyea dadantii are enteric plant pathogens.